An antique shuttle from Țara Făgărașului (the name of the land near the Carpathians that covers part of the area of Brașov County in Romania), has been traveling for some time over meridians, connecting them by an invisible thread. It is the weaving shuttle of “mama Ruța” from Mândra, and you can find its story by clicking  here. (Use Google Chrome for an almost instant translation).

I have been honored to be the shuttle’s host for a while, proud that it comes  from my mother’s birth place, especially since my own maternal grandmother, “mama Maria” from Vad, Șercaia Parish, used to weave yards and yards of rugs, blankets and all kind of wondrous cloths. I don’t remember her shuttles, just her loom, which used to fascinate me. Holding mama Ruța’s shuttle, I felt the same thread connecting me to the amazing guild of the weavers from Țara Făgărașului, and I realized that this guiding  thread was always there, weaving a fabulous tapestry in my spirit; the details of this tapestry were just beginning to reveal themselves…

First, I took the shuttle to the Wesselényi castle in Jibou, my native town, where I happened to be for a few days in August. The former park of one of the most beautiful Renaissance castles in Transylvania has been functioning since 1968 as a Botanic Garden and it harbors the Biological Research Centre.

Then, with the loom shuttle in my purse, like an unmistakable identity sign, I returned to the metropolis that I call home since 2008: New York!

And here is the antique shuttle enjoying views of the East Coast megalopolis:

watching Manhattan’s skyline from across the Hudson and from Liberty Park, towards Lady Liberty, 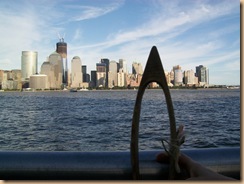 and taking a stroll through Central Park.

I must admit I cheated on this one – I took this picture at an art opening that featured photography from New York.

The shuttle’s next destination? Not just one, but a whole bunch of them, in an extended world tour, beginning  October 14! You too can request the shuttle by writing to the email address provided on its blog. It is a magic traveling shuttle, carrying a spark from the sprit of mama Ruța  from Mândra, Romania, the relentless weaver who wanted so much to see the world. Host it for a while, and you will realize that by doing so, you are strengthening the warp of one of the world’s oldest and most mysterious tapestries…